Is ‘Innovation’ What We Think It Is?

I recently stubble upon a personal reflection that made me think about what I do and –ultimately– how we tell the story of our actions as a society. It’s not like a big revelation or something, but rather a subtle yet important underlying structure of our main narrative that I find interesting and wanted to share with you.

A few days ago, I was listening to a conference (in french) in which Étienne Klein, a French physicist and science philosopher gave a very interesting lecture on the role and importance of sciences in society.

From “Progress” to “Innovation”

Among all the very interesting points he makes and develops, E. Klein speaks about the rise and omnipresence of the term “innovation” not only in business but politics and society in general over the last 20 years, which replaced the notion of “progress”.

Here is a rather long –but worthwhile– excerpt of the video I translated in English for your convenience (emphasis mine) I invite you to read to the end:

Progress as a positive, desirable future-state

Although we can criticise this position as an appeal to a more traditional view of change, one that seems to appeal to traditional planning and command & control, I don’t think it is necessarily the case here. Moreover, I appreciate the historical evolution of innovation & progress and their relationship to our perception of time, and ultimately to our perception of our societies.

Personally, I tend to think that, more often than not and despite our good intentions, innovation is employed for the very reason described by E. Klein, that is to say, “to not change anything”. But whether we agree or not that innovation sees “time as corrupting” and therefore seeks status-quo or whether we should use the concept of “progress” instead, I think we can agree that whatever the word we use, we tend to seek positive changes through our actions.

Now, as I mentioned in previous articles, there is a (non-causal) link between how we approach the world (our paradigms), the complexity we are facing (the context), and the tools we use. Thus, I think this is worth questioning and thinking about “how we do what we do”.

Coincidentally, my definition of “innovation” so far match pretty well with this idea of “progress”:

Innovation: “Significant positive impacts/changes in the context we are acting in.”

Now, one might ask: is innovation always positive, if it has negative outcomes for the wider community, can we still call it “innovation”?

And I think this is a very good and valid question. Given E. Klein definition, only progress is positive because it implies working towards an achievable common ideal.

Given my definition, “significant positive impacts/changes in the context we are acting in” –which is, to me, a “should” (prescriptive, not descriptive) as to “what we (as a group) should see in order to categorise it as such”– then by definition something that has significant negative impacts to a wider community should not be categorised as an innovation.

This definition also implies a “set of causes & effects” (or “interactions”) rather than a single-point solution (eg. not “the iPhone is an innovation”).

So innovation is a process, right?

Yes, we can probably frame it this way.

Or perhaps, because of how it is used today and what we generally associate it with, there is value to take some distance between the process and the persons that perform it. “Doing innovation” and “being innovators” flatter our egos. Instead, I would say there is no “innovation in the present” but rather “innovation is a realisation with the benefit of hindsight”.

In other words, something that happened and that we can only observe now, something of the past that we benefit from in the present and that help shape our future.

And you, what are you’re thoughts?

Anyway, thanks for reading!

What Can Design Bring In Solving Complex Problems? 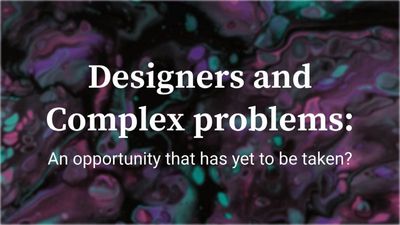